Shelby is the lead Hebrew teacher at Beit Lechem synagogue in Mississippi. He has been teaching classes for over 3 years.

“My first interest in biblical Hebrew came in a bible study class on Genesis when the teacher talked about the origin of the Hebrew word for making a covenant. He said the Hebrew word is actually “carat” which means to cut. They actually would cut a covenant. There was always some kind of cutting involved. I thought why doesn’t the English just translate it that way. From there, I learned more Hebrew words that I didn’t think were well translated to English. So, I started searching for a Biblical Hebrew class. I worked full time so seminary classes were not much of an option.

I searched Biblical Hebrew on the internet and found an advertisement for an actual Biblical Hebrew class at a small synagogue not far from where I worked. I called the Rabbi and asked if the class had started yet and it had but he said just to come and he would get me caught up. I remember how foreign those words looked to me when he would put them up on the overhead projector. “Devorim” (it looked so complicated) was one of our first words that had more than 3 Hebrew letters. The translation is Deuteronomy. But actually they all looked complicated at first.“ 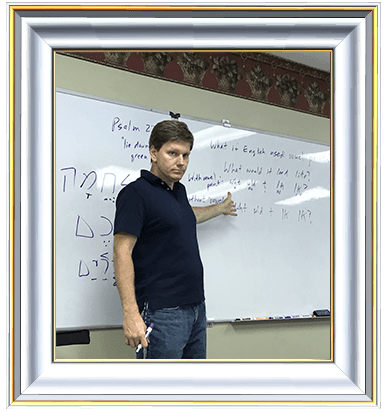